If you haven’t tried Korean barbeque, you are seriously missing out! Asian food, and more specifically— Korean barbeque⁠—is sweeping the nation! Although, it can be pretty scary to try something new, especially if you are actually in Korea. Fear not! For we have the ultimate guide for you.

Bring plenty of friends (and cash)

Whether in Korea or at your local Korean barbeque restaurant, meat prices are on the rise. Lessen the damage by bringing plenty of friends to split the bill! (This makes it extremely inexpensive, the more friends you bring, of course.) While it is common for two people to go to barbeque on a date, more often than not, you’ll see huge parties of people dining on the delicious cuisine. With that being said, don’t forget to bring cash! While credit cards are accepted, it’s much easier to split a 5 person meal with cash.

Where are the utensils?

While a pretty small detail, it’s a little jarring. In Korea, almost every restaurant has their spoons, chopsticks, and napkins either in a box on the table top, or actually in a drawer on the side of the table. Most times a server won’t set the table for you, so don’t worry, just reach into the drawer and you’re ready to indulge.

Don’t be afraid to ask for wooden chopsticks

Unlike most Japanese and Chinese restaurants, Korean restaurants will most likely be stocked with flat, metal chopsticks. These chopsticks are a bit difficult to get used to even for some Koreans and other chopstick veterans. You will get used to them after a while, but every Korean restaurant should have wooden chopsticks for you if you ask! They’re typically a lot easier and are best for gripping noodles and rice.

Call the server over

In Korea, if you want your server to help you, you MUST call them over, very similar to the way it is in most countries in Europe. Some places may realize you’re a foreigner and walk up to your table, however, most will treat you like any other Korean and wait until they are called over to your table.

Korean Tip! Simply raising your hand towards the wait staff works, however if they don’t see you, or you want to be truly authentic say: 저기요 (joh-gee-yo)! While there are multiple things you can say to get a server’s attention, this is the most common. This word has a few meanings but in this case it’s a way to get someone’s attention.

Take advantage of the free banchan 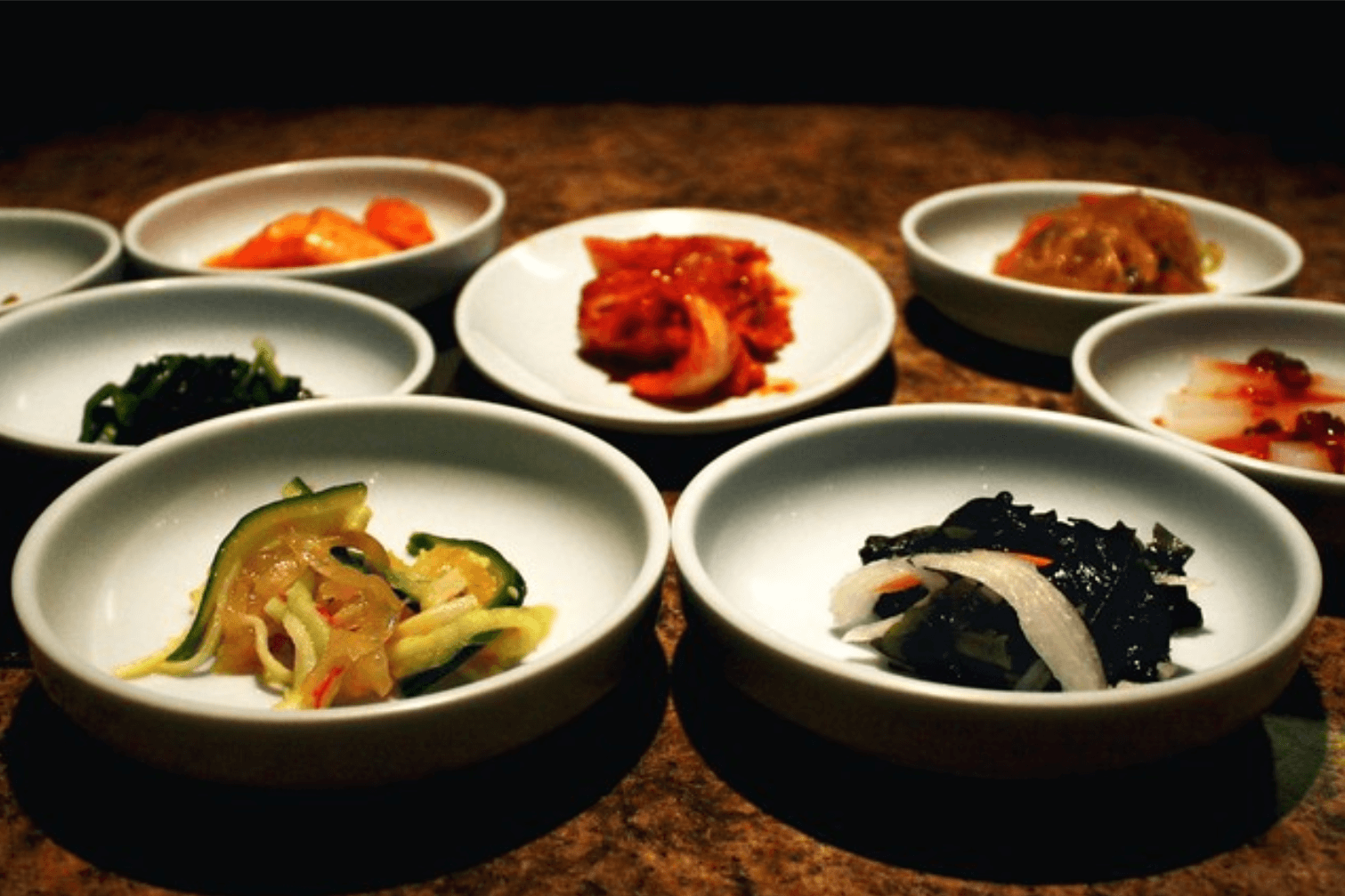 Banchan (반찬) are side dishes placed on the table before you eat. While they can be and are appetizers, they are also meant to be eaten throughout the meal. Banchan differs depending on the restaurant, however some examples that you can typically expect are: kimchi, bean sprouts, pickled radish, Korean-style potato salad, spinach, tofu, and more. Many times they are cooked in vinegar to cut through the savory meat flavors of the barbeque. Be adventurous and try them all! After all, refills are free! 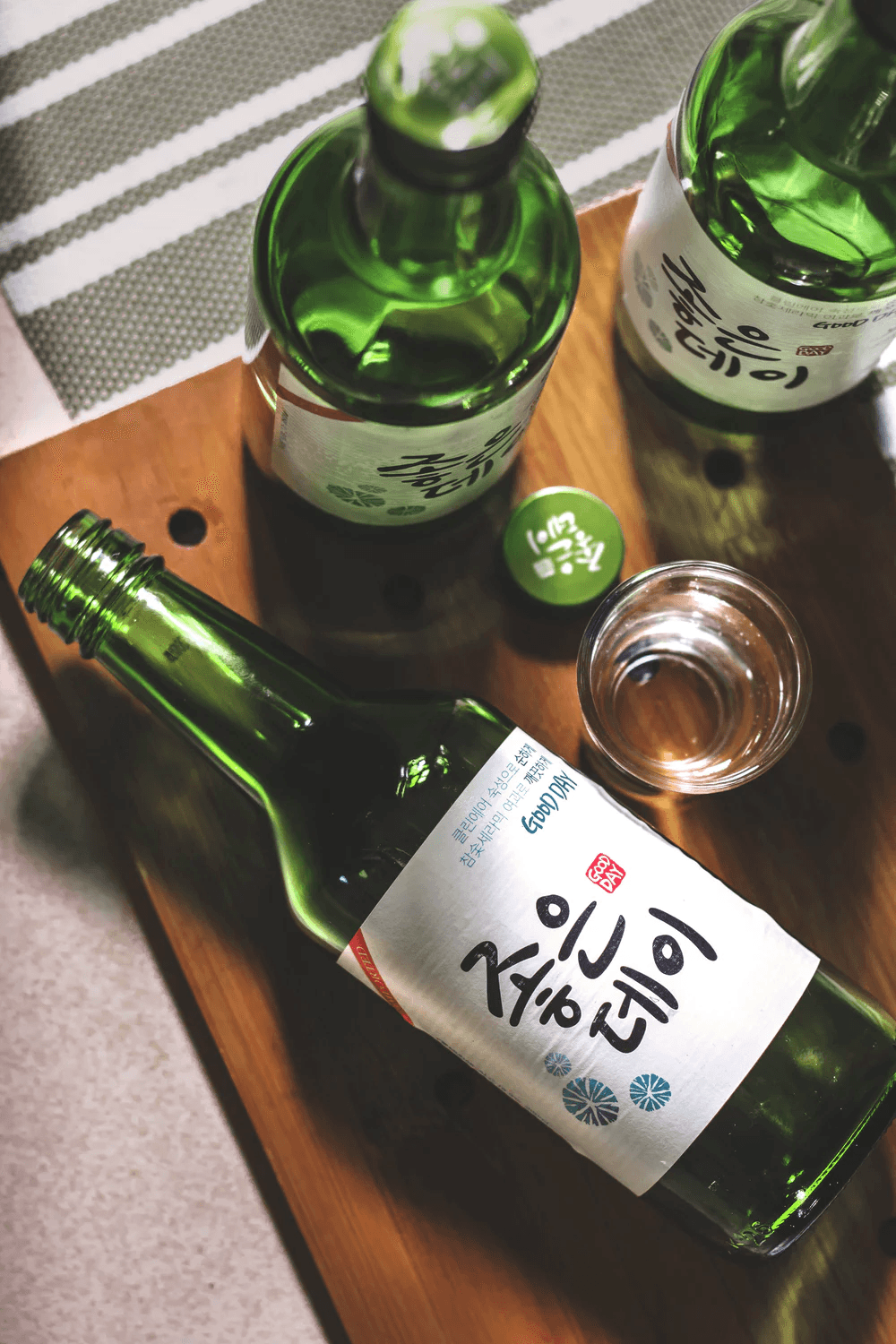 Very very occasionally will Korean barbeque restaurants offer soda. It’s typical that you are only offered water and alcohol. No, you’re not required to drink, but Korean drinking culture is quite big. There are typically three alcoholic beverages offered when enjoying Korean barbeque: Soju (소주 / a distilled beverage made from rice, barley, or potatoes), Korean beer, and Makgeolli (막걸리 / a type of rice wine). Soju is the most popular (my personal favorites are peach or grapefruit flavored). Another popular way to drink is the “soju bomb” which is dropping a shot glass of soju into a cup of beer.

Age is very important for Koreans and their culture—including their drinking culture. You’ll want to know who is older than you when drinking with a group of friends/co-workers. Here are some quick-fire tips for Korean drinking etiquette: Don’t fill your own glass, let others do it for you. Accept the drink with two hands on your cup. If someone else’s glass is empty, offer to fill it up. Be sure to pour with two hands or one hand on the bottle and the other on your elbow. It is typically the youngest’s job to refill drinks. Finally, when drinking next to someone older than you (or in a higher position), turn your head away from them when taking a sip.

Of course, in my experience, many Koreans will understand if you’re unfamiliar with these practices and generally won’t mind. However, it’s better to immerse yourself in the culture as much as possible when you can!

Get less meat than you think you need

A common mistake of foreigners (and even sometimes locals) is ordering too much food. In fact, there are many restaurants that will actually make you pay a fee for unfinished food. You are probably used to ordering an 8oz steak, but many restaurants won’t tell you the size of the portions. One serving of meat could be enough for one person or enough for three, it really depends on the restaurant. The most important rule of korean barbeque is: order as you go. You can always order more, so start small and ask for more if needed! 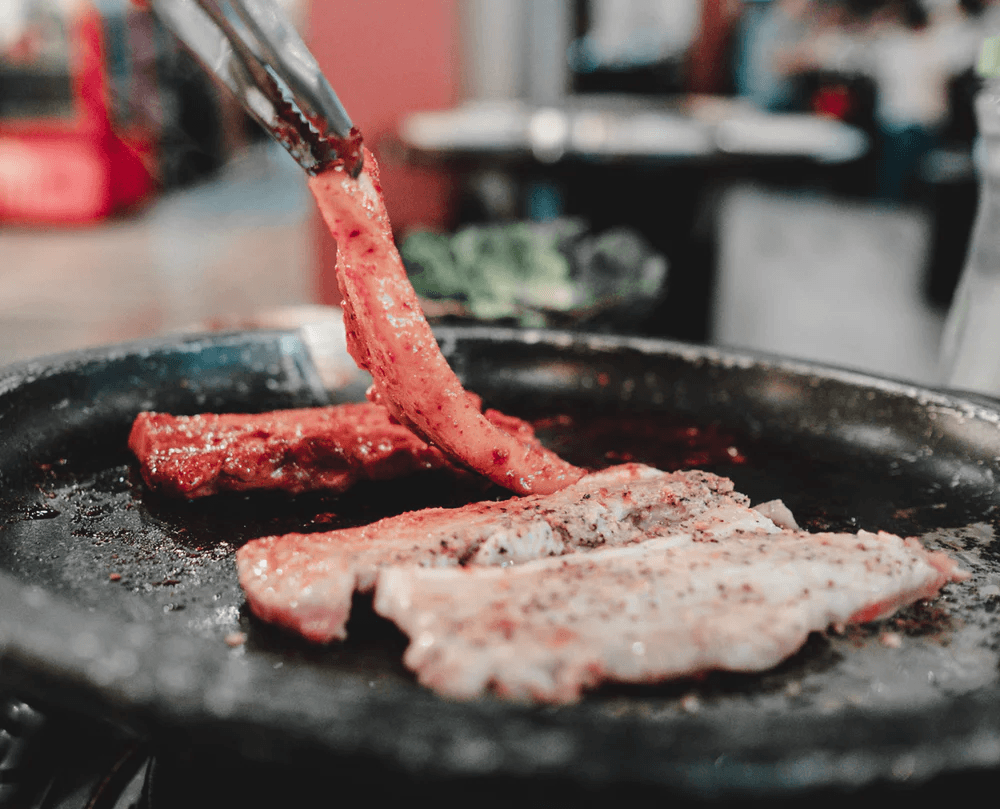 The best part! There are so many options and every Korean barbeque restaurant offers different menus. But… what’s the best thing to eat? That’s why this is the ultimate guide!

Galbi (갈비) are marinated beef or pork short ribs. I’ve mostly only experienced galbi without the bone, however it can also be served with the bone so be careful. Bulgogi (불고기) is marinated thinly sliced beef. This often comes in a huge pile and cooks very quickly. I recommend ordering this first if your stomach can’t wait! Samgyeopsal (삼겹살) is pork belly slices. Think bacon, but thicker and enough for an entire meal. Enjoying your meat with the typical rice combo is amazing, but take it one step further by making a ssam (쌈)! Many times there will be a basket of lettuce leaves at the table (if not, ask for some). Fill that lettuce up with a piece of any meat, garlic, sauce, and maybe even a couple banchan. Don’t fill it too much though! Ssam is eaten in one big bite.

Yes, you will have to cook for yourself. However! Sometimes a server may step in and flip it for you or even ask if you want them to cook for you before the meal starts. Don’t be nervous, nobody’s that perfect at grilling. A tip given to me by a Korean ahjumma (respectful way to say elderly woman) is to wait until the top of the meat starts to sweat. That’s when you know to flip. You’ll also probably notice a pair of scissors on the table. That’s to cut your meat! It feels a little odd at first, but it’s very simple. 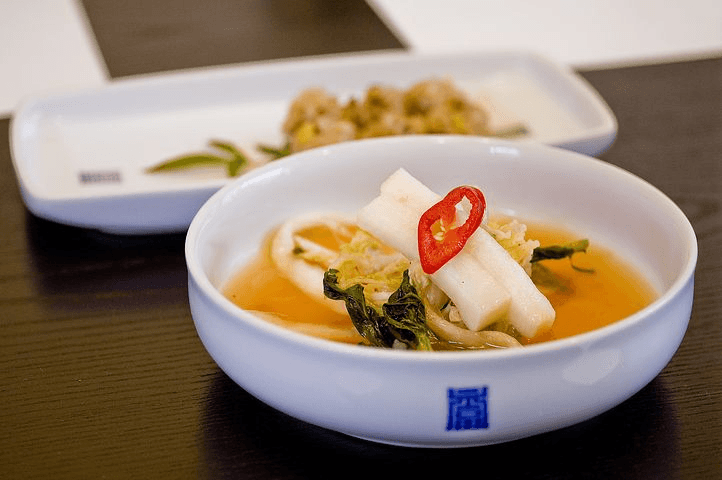 Not many Korean barbeque places in America do this, however, when in Korea you’ll often find a dish placed in front of you. It will most likely look like a dish of oil with some seasonings, or a dish of sauce with onions, it varies from place to place. This is meant for you to dip your meat into! You can eat the meat as-is (it is marinated after all) but dipping it in the sauce is that extra little cherry on top that you never knew you needed.

Every korean barbeque restaurant has swappable grill tops. Typically they should be swapped out when you’re switching types of meat (like going from pork to beef) or when you notice it’s getting quite blackened/dirty. They typically walk around and do it without being asked, but if it’s a packed night you may have to just give them a gentle reminder.

Korean Tip! Try: 새 그릴 접시를 좀 주세요. (say geu-rill johb-shi-lul jom joo-say-yo) This means: Please give me a new grill plate. Though, if you point at the grill they usually understand.

On to the soup! 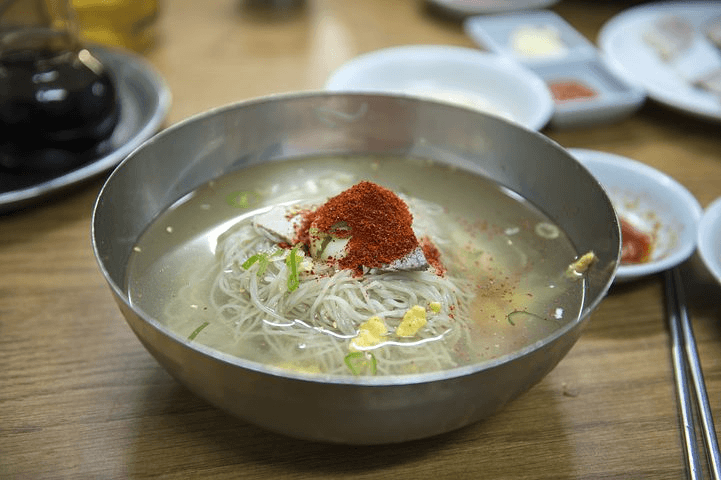 This is optional (because of course, you’ve probably filled yourself to the brim with meat), but many Koreans eat soup after their barbeque. They will occasionally eat it during their meal, but after the meal is when they tend to enjoy a nice cold soup. Order naengmyeon (냉면), which is a cold beef broth soup. Cold soup, oddly enough, aids in digestion!

If you are eating at a Korean barbeque restaurant in America, please still tip! However, if you’re in Korea, they don’t tip anywhere! You’d actually be given a strange look if you tried.

Again, this is optional if you’ve filled yourself up, but many of us have an entirely separate stomach for dessert! So for those of you with a sweet-tooth, in Korea, you can find a Baskin-Robbins just about anywhere and it’s the perfect way to end your day sweetly.

And now you’re eating Korean barbeque like a pro! We hope this guide helped in both calming your fears and learning a bit about Korean culture! If you’d like to create your very own personalized trip to Asia, contact us at: info@chloejohnston.com!