Must See in the Uffizi Gallery in Florence, Italy

What you must see in the Uffizi Gallery in Florence, Italy, is extensive, and a with not to be missed art collection, it can be overwhelming. With such a wide array of art pieces, it’s hard to know what you should spend your time viewing. The Uffizi Gallery is located in a building that once housed the Medici family Uffizi, or in English “offices.” The Medici family were extremely wealthy renaissance bankers and were in control of the city of Florence from 1434-1737. This powerful family collected many priceless renaissance works, most of which can be found inside the Uffizi Gallery in Florence, Italy. 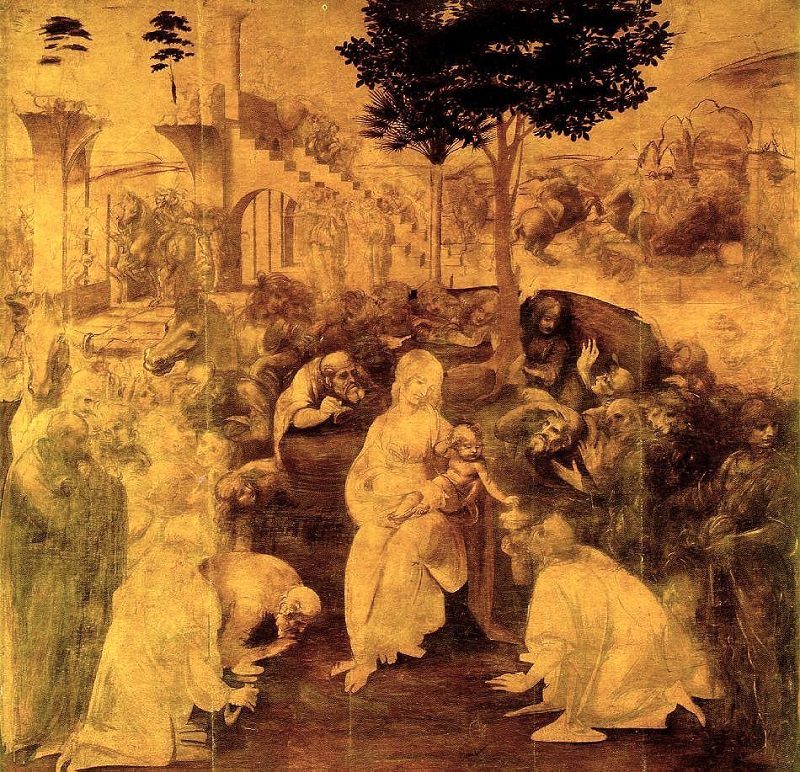 For all of you Da Vinci lovers, this painting, created in 1481, is a must see in the Uffizi Gallery and has been there since 1670. As you know, Leonardo Da Vinci is one of the great artists of the world with numerous well-known works. This particular painting is an oil on wood canvas and over time, dirt, dust, debris, and decay have slowly worn it away. It recently underwent a 6-year restoration, bringing the vibrancy back to life. While the painting was undergoing this restoration, thirteen more figures were discovered throughout the painting, as well as a light blue sky and the clear facial expressions of the people portrayed. The restoration was completed in 2017, making it a prime time to see it in its purest form.

Sandro Botticelli- The Birth of Venus 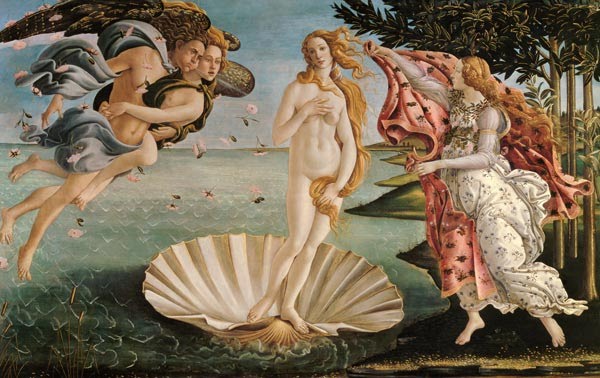 This work was most likely created in the mid-1480’s, by Sandro Botticelli. The woman standing in the seashell is Venus, and the woman trying to drape the cloth over her is known as Flora. They are both modeled after Botticelli’s muse, speculated to be a woman named Simonetta Vespucci- a noblewoman. When Simonetta came to Florence, it seemed the entire Florentine court was in awe of her. The story goes that Botticelli too was completely infatuated and in love with Simonetta, although she was already married, meaning he could never have her. Sadly, in 1476 Simonetta died at a young age of 22, most likely from tuberculosis. Botticelli remained infatuated with her and continued to paint women that look strikingly similar to her. This painting and many others by Botticelli are a must see in the Uffizi Gallery in Florence, Italy. 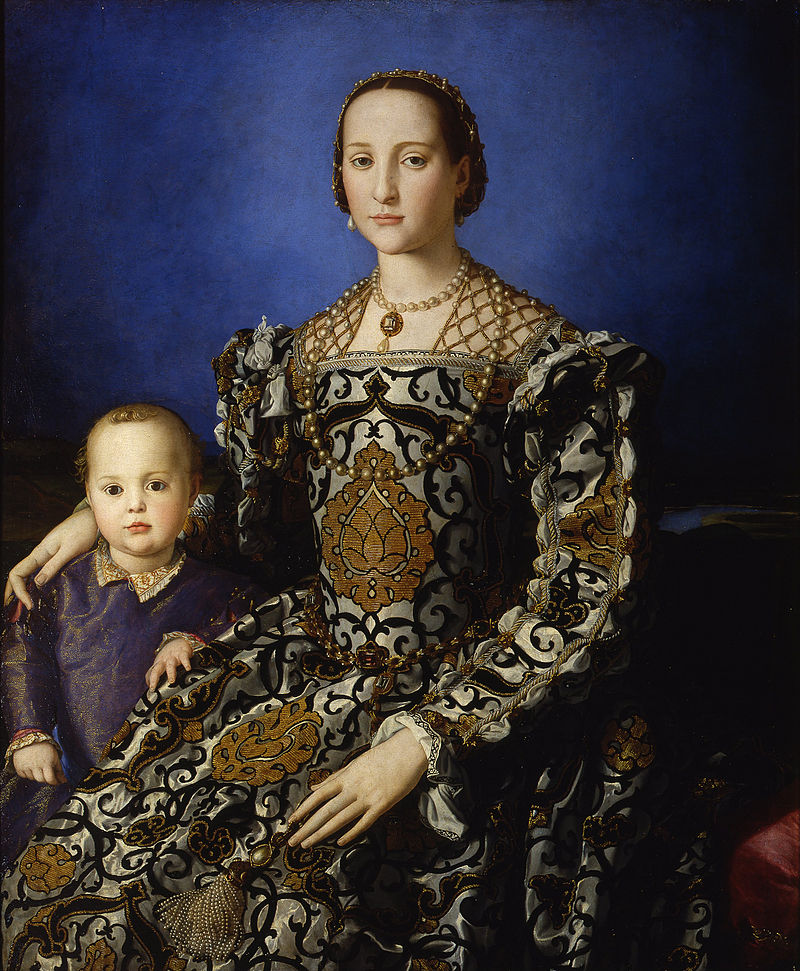 This work in 1545, is by the great Italian artist Bronzino. The woman in the painting is the wife of Cosimo Medici, Eleanor Toledo. We know this may seem like just another portrait of a wealthy woman, but take note of the details on her dress and the difference in how people dress today in Italy. Take note that this is a two-dimensional painting, yet somehow Bronzino manages to capture details in the fabric of the dress perfectly. The shine, the depth, the ruffles in the fabric, and also the exquisite embroidery. Imagine doing that by just using paint… incredible! A few of her dresses are on display in the Galleria del Costume at Palazzo Pitti in Florence. For a very long time, the dress in the portrait was nowhere to be found. Many thought it was simply lost to history. Then, the tomb was opened in the nineteenth century, a discovery was made. Eleanor loved this dress so much, that she was buried in it. You can see the dress in all its glory at the Galleria del Costume at Palazzo Pitti, making this a must in the Uffizi Gallery.

This is one of the more famous works by Leonardo Da Vinci, called Annunciation. The painting is meant to show the first meeting of the Angel Gabriel and the Virgin Mary. This moment is when Gabriel is sent by God to tell Mary that she will miraculously become pregnant and give birth to a son called Jesus. She was also told that Jesus would be the son of God and that his reign would never end. Da Vinci also worked on this painting with his teacher Verrocchio and is one of his earliest works. 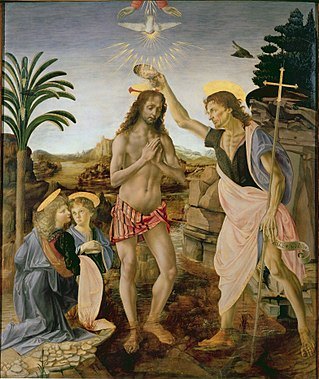 This work is very valuable in the world of art history. This is a must see in The Uffizi Gallery. Verrocchio was a great Italian painter himself, and he was the infamous teacher of Leonardo Da Vinci. This particular painting is valuable because it clearly depicts two different artists and the changes that were occurring in the art world. Leonardo was about fifteen when he completed this painting with Verrocchio. The man on the left of Jesus is by Verrocchio. Take note of Verrocchio’s technique with the man’s body. It’s very harsh in comparison to Jesus’ figure. The depiction of the bones is very intense, while Jesus’ body is much smoother. 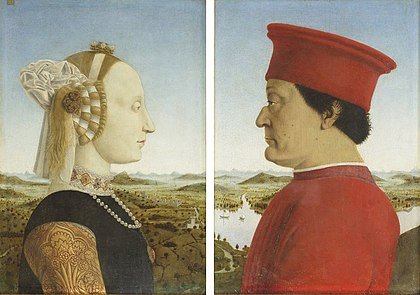 This work is the first profile painting. The two people pictured above are the Duke and Duchess of Urbino. The Duke had a very bad accident in which he lost his eye and a bit of his nose. The Duke and Duchess piece is significant in the art world because it is the first example of a profile work. The Duke’s face has a horrible scar, so Piero shows him as a profile. These two were originally a diptych, meaning that they were together with hinges. Now they share one frame in the Uffizi Gallery. The Duchess’ is painted in memoriam, as she was already dead when the painting was commissioned. Her hair and clothes show that she is in the height of fashion. Her jewelry and embroidery show her husband’s wealth. If you want to see this painting in person, visit our Italy desination page to discover what awaits you on your own vacation! 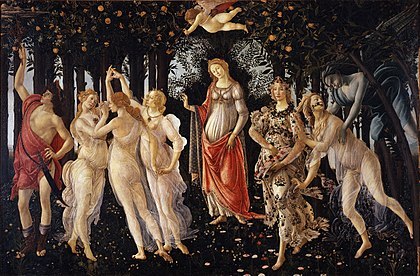 Here’s another work of Botticelli that is in the Uffizi Gallery. In this one, called Primavera- meaning springtime, we see more examples of Simonetta, his muse. Many of the women in this painting look like her. The woman in the floral dress is  Flora, and the three women dancing are the three muses. The blue man is Zepher, a wind God kidnapping the Nymph Chloris. Historians believe that this painting is for the Medici family, because of the use of oranges in the painting. The oranges are the same as the red spheres in the Medici crest.

There are so many works you must see in the Uffizi Gallery in Florence, Italy. This is only a short list of some of the famous paintings that are here, stop and take time to enjoy it. The museum is set up to give the observer an art history lesson. It goes in chronological order of when the piece was completed. This way you get a sense of how art has evolved over time. After you’re finished in the Uffizi Gallery, spend some time in a cafe with a good cup of coffee and reflect on the incredible cultural and historical works you have witnessed.

Want to see them in person? Contact us at  info@chloejohnston.com to plan your very own trip to the Uffizi Gallery in Florence, Italy.