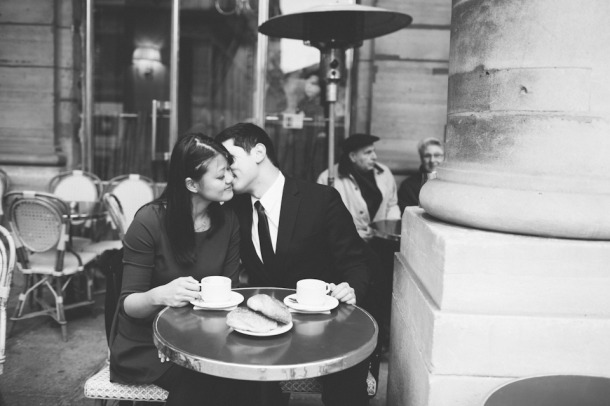 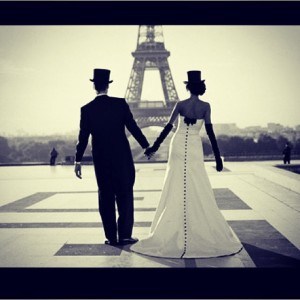 Everyone has romantic notions about dating in Paris. And why shouldn’t they? In movies, books, magazine articles, on Pinterest boards, blogs and Instagrams throughout the world, people tend to see the city through a very rosy, amourous lens.

Culturally speaking, the French do have a certain preoccupation with love and romance. Flirting seems to be almost second nature to them, and they are a lot less squeamish about PDA. But, let’s get one thing straight before we dive into the myths and realities of the Paris dating scene : Dating doesn’t exist. It is a very American concept, and in fact there is no one word in French that could be considered its true equivalent. What’s more is that the French place very little importance on Valentine’s Day, which just passed a few days ago.

They call it La Saint-Valentin, although for many, it’s just another day. Restaurants might prepare special menus, and chocolate or flower shops might see a little jump in sales on that day, but according to a recent poll on LaParisienne.com, 86% of nearly 6,000 readers who responded do not consider Valentine’s Day to be an important holiday. Does that mean l’amour is dead?
Of course not. Love is still alive and well in the capital, but there are some myths to dispel and customs to observe if anyone wants to even begin to understand the complexities of getting involved with the French. So if it’s not dating, then what is it called? First, let’s get some vocabulary out of the way :

Now that we’ve covered the basic terminology, let’s talk about what to expect when going out with a French person.

Say “Yes” to monogamy, or be swiped to the side like a “No” on Tinder : The French don’t like to share. They might not all be faithful creatures (and it’s not just them, it happens in every culture), but they move fast in terms of exclusivity. Once you’ve caught the genuine interest of a French guy or girl, you’re on the way to becoming their “copine” or “copain” very quickly, whether or not you know it. The idea of “casual dating” doesn’t resonate with them, unless you do happen to meet through a dating app, such as Tinder, which is notorious for that kind of thing. But someone who asks you out formally likely has higher expectations for what is to become of your original meeting.

Don’t be weirded out by affectionate pet names : Ma belle (beautiful/gorgeous), ma douce (sweetie/sweetheart), mon ange (my angel), mon trésor (my treasure), mon coeur (my heart), mon lapin (my rabbit), ma chérie (my darling), mon chou (dear/sweetheart), ma puce (darling/sweetie). The list goes on and on, and most of these words have literal meanings for food and animals, but it’s just like we say “pumpkin,” “sweetie pie,” “honey,” etc. in English. The thing is that you might get called one of the above in the first or second text message from your French love interest, which might be disconcerting, but trust us, it’s totally normal. It doesn’t necessarily mean they consider you to be their love already; it’s just an endearing way of addressing you that indicates they are definitely interested.

Try to be well-read, and know how to make food from scratch : The French take great pride in their rich literary history and particularly enjoy discussing philosophy. This doesn’t mean you have to memorize the works of Voltaire or Zola in order to talk with them, but if you are interested in French culture, reading some of the famous literature is a great way to start learning more about it. It’s not only enlightening but also helps to explain how and why the French became the people they are today. As for food, cooking is an art form in France, and particularly in Paris. Well-sourced produce, ingredients and some creativity in the kitchen are key to eating like a French person at home. And if your cooking skills please them, you’re already ahead of the game.

Don’t change who you are : Ok, in all honesty, this is probably the most important one. If you’ve been asked out by a French person, it’s because they took an interest in you. And more likely than not it’s because you’re different. In fact, according to another recent article on LaParisienne.com, 23% of couples in France are binational. Sharing each other’s cultures is one of the most exciting and fun aspects of going out with a French person. It’s an opportunity to learn the language, the customs, and also to learn more about yourself in the process. Emotions are the same in every language, and you possess all the same ones as they do. At the end of the day, chemistry is chemistry, and if it’s there, then there’s not much else you can do but enjoy the experience. So take each day as it comes, be prepared for the ups and downs, and above all, don’t lose your identity because it’s precisely what attracted them to you in the first place.

What to Know about Dating a French Guy: French Guy Profiles

“Girls go to college to get more knowledge and boys go to jupiter to get more stupider”, we think it’s safe to say that is an international mantra among women in the dating pool. If you’re looking for an international love-scapade with a French man, read and see if booking your ticket is the right move.

French men’s styles are very simplistic and open to try new things. There are no qualms against wearing tight-fit jeans, they aren’t trying to fit the “hipster” aesthetic that America has proudly claimed. They wear their fair share of plaid button-ups, fedoras and high end sneakers – very stylish and very simple.
The simple aesthetic also falls into their hair, men normally go for the messy, bedhead look to add an air of mystery to their look. Where did they just come from? Who were they with? Did he just get out of bed? We’ll never know until the first date.
If you are into facial hair, these are your men. French men have recently adopted the trend of growing a beard but maintaining its cleanliness and sharp cut. A refined, hairy man? What more is there?

For your international love, you’re going to have to start with dating. French men love to date, however French culture is not accustomed to dating more than one person at a time – so be weary and pick one dapper dan. You can carry fresh red flowers with you.
Like any country, there are shy men and confident men, good boys and bad boys, rich men and poor men (we’re not judging) – therefore every experience may vary with a man you meet. However from our facts, we have experienced our fair share of different types of men.

The Intellectual: This man is extremely intelligent, probably studying to achieve his PhD and loves to partake in a deep conversation about politics and philosophy. This existentialist-like mindset can be great conversation and company for your boring nights, just be sure to brush up on your Voltaire and Foucault before you do.

The DJ: If you’re looking for a bad boy, look for a French man in the music scene. Many French men love music, specifically electronic and European DJ styles, and will constantly be on the move to find the next best concert or performance (if they aren’t performing themselves!). This guy is a great man if you’re looking for fun adventures and new musical experiences.

The Worker-Bee: You’ll be able to spot this guy by his three-piece suit and briefcase, most likely with his phone glued to his ear. If you’re looking for a man with a substantial career and works for it, this guy can probably be found after work enjoying a happy hour special at the bars. This ambitious man is nice to have if you’re a busy-bee as well, think about how nice those calm date night snuggles will be.

Now, we understand that there is more to a man than his style and dating habits, but we also understand that when scoping your prey those are the top things to acknowledge. We’re only here to help, now go forth and pursue your international love with a croissant in hand.

But what if your dates end in a serious relationship? Even marriage? Here are some helpful things to know about a French wedding.

Summer is out, but Fall is in. The only thing that won’t be changing are our constant invites to weddings and dress shopping. Four hours into pinning new hairstyles we came to wonder, what’s the diff between French and American nuptials?

Thinking about a total Parisian wedding? You’ll need to break out your strongest pen. Because France is a country that is completely laic (complete separation between church and state), couples must get married at their town courthouse for a legal marriage first. The ceremony will usually last about 20 minutes and will be performed by the mayor. Your wedding day will usually start with this marriage à la mairie and will then be followed with the more personal ceremony with friends and family. Along with the romantic town hall wedding, getting married in Paris requires a lot more paperwork than Americans are used to. You will bring these papers to your town hall wedding, and the mayor must see them before they can perform the ceremony. Don’t worry if you’re not a native French speaker, there is a representative who will always be available at your town hall if you need help.

Ceremonies, also different. Firstly, there is little-to-no wedding party on either the bride or groom’s side. The bridge isn’t the star of the show as in American culture, the couple gets equal attention, as do both families as they come together. There will usually be a flower girl and a ring bearer, but they will be younger and dressed to match the bride and groom. There are few parts to a French wedding; le vin d’honneur, a happy hour where people will drink wine or champagne and munch on finger food, is followed by the wedding meal and then the party, which can include a family-and-friend show, dancing, and other traditions that Americans are familiar with. However, if the bride and the groom have invited a lot of people to their wedding, most people will not be invited to all of the events. Depending on how close you are to the couple, you could only be invited to the wedding ceremony, or le vin d’honneur, or certain courses of dinner (because you can expect a five-course meal complete with an appetizer, entrée, salad, and a cheese course followed by dessert).

Something that is also very common at French weddings is to have an open bar. The bar will be serving only wine and champagne, but the drinks will always be plentiful and free. Unlike most American weddings that tend to wrap up before midnight, French weddings can last long into the night, into the early mornings. The French like to have an excuse to laugh, talk, drink and dance together, and a wedding is a perfect opportunity to do all of the above.

And most notibly the best part? Parisians don’t do awful Bridesmaids’ dresses. They don’t do them whatsoever. The ladies can wear whatever they want.

Give it to me short and sweet: