With Paris Fashion Week underway, the city is flooded with fashionistas and tourists and a multitude of luxury hotels await them! The following list of five luxury hotels are some of my favorites and stand out because they are rich in character and never short on luxury or five-star service.
Le Royal Monceau
Easily one of the city’s most visually pleasing hotels, the eighty-five year old Royal Monceau is the epitome of luxury and indulgence. Originally opened in 1928 and then renovated and reopened in 2010 by famed designer Phillipe Starck, the hotel offers a slew of amenities and top-notch service. From the largest pool in Paris, to the Clarins spa, two five star restaurants and a movie theatre, guests are sure to want to extend their stay, we always do! 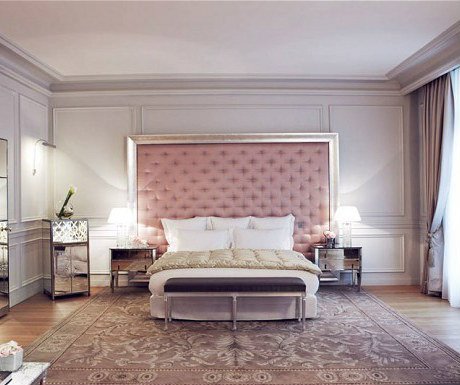 The designer, Starck, has left his stamp on hotels all around Paris, but the Royal Monceau is his crown jewel. Starck re-imagined the historic hotel with art deco and post-modern décor, a celebration of the arts with pieces from thrift shops and auction houses lining almost every wall, an art gallery and even an electric guitar placed invitingly in each guest room. Guests can truly invoke their inner rock star with the guitar on loan and access to a portable recording studio.
37 Avenue Hoche, 75008 Paris
Hotel Lutetia
Ideally located near the Seine, the Musée d’Orsay, and close to some of the best shopping that the Left Bank has to offer, Hotel Lutetia is an ideal place to stay while visiting Paris. Opening its doors in 1910, Hotel Lutetia fully embodies the spirit of the area in which it is located, the Saint-Germain-des-Prés. 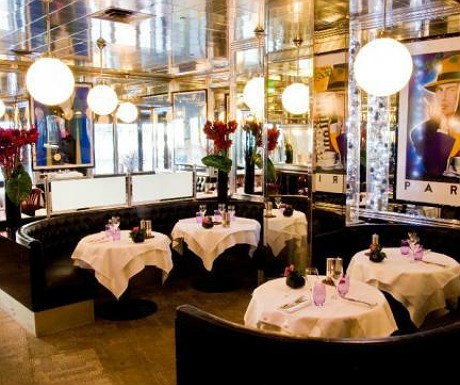 With more than eighty pieces from artist Thierry Bisch displayed throughout the hotel, and the hotel’s bar often playing host to some of the best Jazz in the area there is always something to admire and enjoy. With Sumptuous Art-Deco-Inspired rooms, the hotel offers the largest choice of suites in the city, and an in-hotel spa, guests will experience nothing shot of pure luxury and entertainment.
45 Boulevard Raspail, 75006 Paris
Four Seasons Hotel George V
What does luxury mean to you? Pampering, star status, privacy? You will experience nothing short of this at the iconic Hotel George V. Within walking distance of some of Paris most famous monuments and a stone’s throw from the most well known Parisian clothing labels, the Four Seasons Hotel George V is well known for its elegance and commitment to hospitality. Originally opened in 1928 as the Hotel George V, the hotel was adopted by the Four Seasons family in 1997. 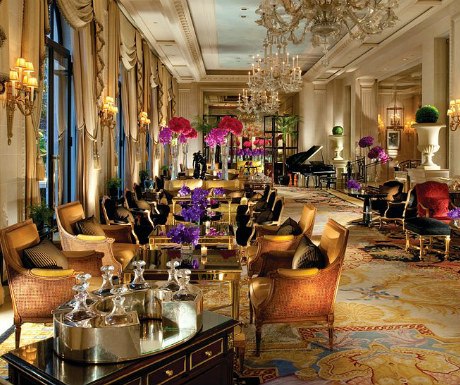 After spending a few short days here indulging in all that the hotel has to offer, you may never want to leave! Aside from the stunning interior décor and high level of service that one would expect from any Four Seasons hotel, their restaurant is the epitome of French cuisine and not to be missed! The best part of the hotel – their famous and absolutely stunning floral arrangements. Created by an American florist (go figure) the exquisite arrangements change regularly and are yours to drool over during your stay.
31 Avenue George V, 75008 Paris
Hotel Plaza Athénée
If it’s a bit of history and luxury you crave, Hotel Plaza Athénée is the perfect spot! When in Paris most people can’t wait to leave their hotel to get out and explore the beautiful city, although with almost everything you could want or need at the hotel, you might not want to venture past its front doors. Offering five restaurants, tours of the hotel’s 35,000-bottle wine cellar, one of the hottest bars in the 8 arrondissement and the Dior Institut spa that uses products from the French fashion house. The hotel goes out of its way to ensure guests feel at home in rooms decorated with nuances of both old world and modern décor. Guests are able to select their own pillow and are given access to a music library that could rival that of any music enthusiast. 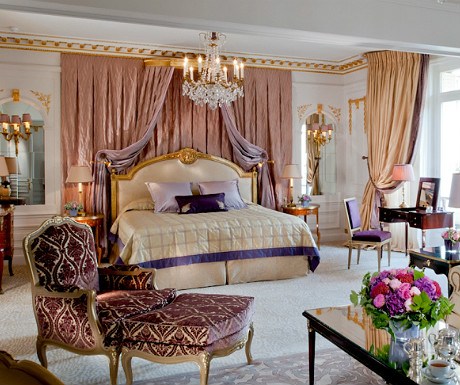 Undergoing renovations beginning October 1, 2013, you’ll need to book soon, otherwise wait until the new and improved Hotel Plaza Athénée re-opens its doors in May 2014. Insider tip – the hotel will be auctioning off some of the pieces that made it famous! On October 8, 2013 the auction will take place at the Hotel Marcel Dassault. Grab your auction paddle!
25 Avenue Montaigne, 75008 Paris
Hotel Square
There is new luxe kid on the block! The Hotel Square, nestled in the city’s media district, near Radio France and just a stone’s throw away from Lady Liberty – no, not the one on Ellis Island – is the choice of discreet stars, clients looking for a bit of piece and quiet and great views of the Seine from almost every room. The four-storey boutique hotel offers a modern design that is distinctively French in its use of color and the sumptuous textures showcased in each room. 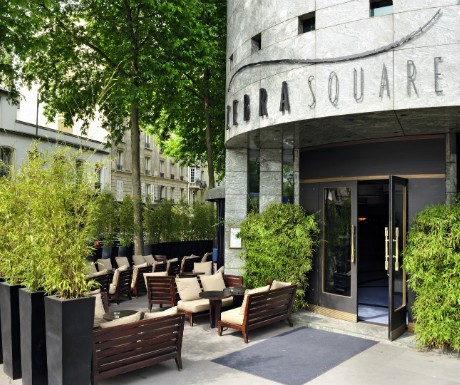 The art of the hotel is not limited to its unique design and décor, the hotel also has an art gallery which has exhibits on a six-week rotation, so repeats guests will never see the same piece of artwork twice. Like many a luxury hotel in Paris, a stop at the hotel’s spa is a must! And of course, the trip would not be complete without a visit to the hotel’s famed Zebra restaurant.
3 Rue de Boulainvilliers, 75016 Paris
There you have it, some of the city’s most luxurious hotels and absolute best places to lay your head. But no matter where you stay, as someone who wore the little black dress best once said, “Paris is always a good idea!”
Chloe Johnston is the CEO at CJ Shopping Tours.